Do you have seen any set that appears in no book? Well I got a set many years ago that I’ve never seen in any book. This can be good since no burglar is going to visit you but this can also be bad because nobody knows that this set exists. Anyway, there is always a chance that you have something special because it isn’t shown anywhere.

As far as I know the set was bought in Italy. I’m the second owner.

Although I didn’t expect to find any special Barbie doll for X-mas I was surprised by a nice seller who had a good offer. So I was able to enlarge my Barbie made for the Philippine market collection this Christmas. I had to wait long years to find any Barbie doll from there in general and suddenly it seems that some collectors sell a part of their collection from this very special country. I recently saw a report about a hospital and the poverty there. So I’m surprised that there were sold so many special Barbie dolls only for the market there. In a way that’s strange somehow. As far as I know Spainish is the offical language. Their indepence was celebrated in 1898 and for their 100th independence anniversary  were Barbie dolls available. I got one of them for X-mas.

The Holiday season is not far. Since August you can buy the lastest Holiday Barbie 2018 if you want. I’m not such a fan of her. I have several Holiday Barbie but not the latest ones. I think the history of the Holiday Barbie series is very interesting. Within the last 30 years many things have changed like the jewelry, the Make-Up and the dresses themselves.

I think they are not so festive anymore. The early Barbie dolls from this series you can see a greater “wow”-effect. I don’t know really how to describe it but I would express them as beautiful. Maybe this is so because I grew up in this era and they were familiar to me. Anyway, I also have later Barbie dolls from after the 2000.

Do you know the toy store FAO Schwarz in New York? Probably not if you’re not a habitant from New York or a Barbie collectors. Why do I talk about the shop here?

Well in the last weeks there was an article that the shop should move. The shop belonged for a while to the Toys’r’us company which failed for bankcrupcy in 2017. In 2016 the Threesixty group bought it from TRU. Obviously they have great plans for the oldest toy store of the USA. There are plans to open a shop in the legendary Rockefeller Center in November 2018 and an additional shop in LAGuardia airport.

The shop was known to Barbie collectors for their special FAO Schwarz dolls from the 1990s and 2000s. I have some of them but not all. I really like the creativity from the 1990s. Below you can see some pics.

The shop was also known for it’s big piano installed on the floor ( which can be seen in the movie “Big”with Tom Hanks which was filmed in the 5th Avenue Shop in 1988.

And here’s the link that showed up last week https://www.wsj.com/articles/fao-schwarz-is-set-to-return-and-it-needs-people-to-dance-on-the-big-piano-1535410371

I was recently told that there are several undocumented Barbie dolls produced by under license by Basa in Peru. It made me curious and I was offered to buy one of them. To be honest I never heard of  Miss Yanbal before. Maybe her title is similar to Miss Universe. I don’t know exactly.

What I know is that she’s from 1985 and it seems like she originally came in a bathsuit with white and golden lace and a sash that says “Miss Yanbal 1985”.

Interesting to know is that she has no markings her body. There are obviously some Basa Barbie dolls that have no marks. It seems that some have marks and some not. Among the collectors it caused confusion in the past. Some said that without a marking the dolls are clones.

Today I open my treasure chest again and present you the Sea Lovin Barbie. She’s a Special Edition since she was only available in Europe. I’m not sure whether she was available in Canada or not.  Mine is almost complete except the two blue stars on her skirt (as you can see she has two blue stars on her skirt but they are not original). I got her from another collector, we changed the dolls. As you can see she comes with a t-shirt in navy style, a white skirt, duffle back and a pair of white shoes. She looks very similar to the Loving You Barbie. 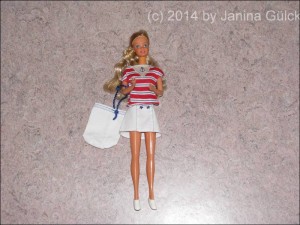 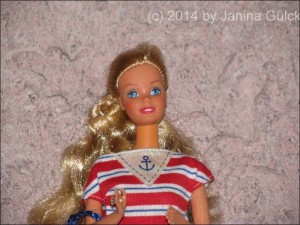 Today I gonna open my Treasure Chest again. This time I gonna show you a Palmers Barbie. She is the last one of a series of Special Edition Barbie dolls for a Clothing store chain in Austria. They are primarily specialising in lingerine, swimwear and hosiery. In the late 1990s there were some Special Edition Barbie dolls made for Palmers. All of these dolls came in lingerine. They are hard to find. I recently found mine without box, without one earring and her ring but she’s in mint condition.