A long time ago Barbie clothes had names. The era started in 1959 and ended in the early 1970s. Until then every clothing ensemble had its own name. The names were sometimes funny, partially inspired by Hollywood and had a very high quality… a kind of Haute Couture in miniature. Today I’d like to show you two of my early (Vintage) outfits. The first one is a dark gray suit with a white shirt called Saturday Date. The red socks came in an extra Accessory Pak along with the red tie. Hey, we can be creative in this point. We can combine what we like. Why not a red tie and red socks for a date on Saturday in 1961? Have you noticed the tiny zipper on the pants? 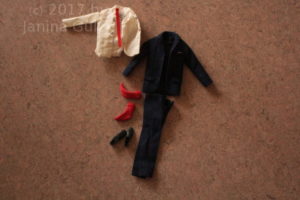 The next outfit is for Skipper.  It’s called Sunny Pastels and was produced in  1965 for Skipper (Barbie’s younger sister, also available since 1965). The dress is made of cotton and has a very high quality too. Although the outfit is 52 years old the colors are still vibrant. By the way it’s one of my personal favorite outfits. 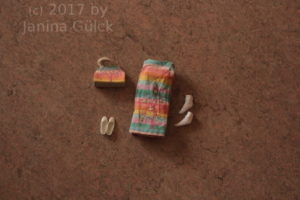