Before you do your first repair you need some useful equipment. You need governor belts in the right size, the right replacement for the pullstring, the right ferrules to reattach the flower. Some tools are useful for the repair too like tweezers, cotton balls, rubbing alcohol, disposable gloves, locking forceps and package tied. Some acrylic color in the right skin tone is also useful later after the repair.

You see before you can do anything you have to invest some money. Some collectors told me that they just tried to repair the doll without any knowledge and damaged the mechanism so badly that some of them threw the dolls away. I don’t recommend it. Before you do anything become familiar with the repair. I’ve done some videos while I repaired a Talking Barbie.

The range of my videos goes from the buy or not buy decision to the cleaning of the mechanism to the repair itself and then about how to reseal the body again and reattach the limbs again.

Don’t expect that the cleaning is a fast thing to do. It can last several hours depending on the leftovers of the governor belt itself. I’ve had some easy to clean dolls and some weren’t that easy to clean. Some Talking dolls are cooperative and others don’t.

One of my first Talking Barbie was not cooperative. I tested her for days and got not the right speed for the record. I almost became mad but I found a solution for the problem. The easiest Talking doll I repaired was a Talking PJ. She started almost immediately to talk after I did the test. The mechanism itself is kind of engineering art. It’s done in a very clever way.

If there are no injuries from the outside the mechanism can hardly be destroyed but by a father with a screw. The only weak point is the leg knob. The legs tend to fall of the body but only Talking Barbie I heard it from later produced 1970s Barbie dolls too. They all can be repaired with my method.

I’m not sure why this problem is there so often but maybe it’s because of the production process or maybe the attached legs exerted too much pressure to the knobs so that they just broke. I’m not an expert but I try to find the why.

The repair is not impossible

Due to problem that many collectors try to do the repair just so, I decided to do a video series that they realize where the problem is. It’s all about the right technique and the knowledge how to do it right. There’s no need just to destroy the doll just because you want to see what’s inside the upper body.

I’m not a fan of such actions. That’s one of my reasons to make this video.

Do you know the feeling when you got a piece that you have been looking for an eternity?It’s a very good feeling. That’s what I feel at the moment like. Last weekend I found it unexpectedly and I won the auction. The postal service managed to ruin the envelope but nonetheless the dress arrived here safe and sound. I like it because it’s a nice piece of history. I have the green version dress although there is a black version of the dress too. Maybe that’s my next goal. 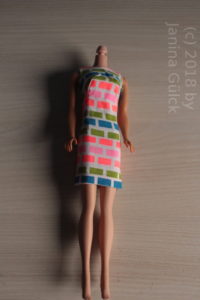 Several years ago I got in different lots a  Twist n Turn Japan body (from 1967) and in another one the right head. I restored the doll down to her waist but the legs of the body had bite marks and the joint was coming out of the knee. In the last weeks I was lucky enough to find the right body with good legs. So in the next weeks I can finally finish a repair project that lasted several years. It’s good to know that my search has come to an end.

I will tape how to clean the MOD Barbie and how to do the rest that two dolls become one. 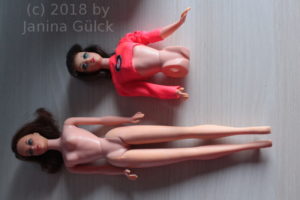