The crazy Barbie collector is back again and has a new topic for you. Christmas is coming up in the next week and it’s time for Santa Claus. In the last weeks a thought came into my mind. What about the Santa Claus Ken?

He came into my mind because I don’t have him in my collection but it would be nice to have one. I have the whole series of Coca Cola Barbie from 1998 & 1999 but Santa Claus is missing. This year I realized it in time and I hope that he’ll arrive in time since I’m not at home for the holidays.

I have them all

I bought almost all dolls from the Coca Cola series several years ago. I have them all, the blonde waitress, the Soda Jerk Ken, the Coca Cola Soda Fountain Sweetheart Barbie with her petticoat, the Majorette and the Cheerleader Barbie. When this series came out around 20 years ago I wanted to have them all. I think they are cute, they are dressed in one of my favorite decade’s outfits and there is a diorama for this series. The diorama, the Coca Cola Soda Fountain, is great. I wish there were more of these dioramas. It came in a giant box from Spain. Okay, I got mine from Spain. Hey, but who cares? The most important thing is to have it. What about you?

Many years I didn’t realize that the Santa Claus Ken belongs to this series because the other dolls look more like it’s more like summer and not like Christmas. Maybe it was the reason why I didn’t consider him being part of this series.


I hope my little photo stories become better and nicer with the new Santa Claus Ken. That’s the joy of a Barbie collector … just play around with your dolls. Believe it or not but I have seldom time to do so.

This week I continue my series with my little wiki of Barbie, her family and friends. I’m going to write a little bit of the male friends of Barbie over the last decades. Her boyfriend, called Ken, was available first in 1961. There was a big demand for something like a male friend or a boyfriend, as the literature says. I don’t know if it is true or not but some sources report about Ken that there were three prototypes of the doll with different male genitals or intimations but only the the weakest intimation made it into production. It was regarded as very offensive for girls at the age of 10 or older to see a replica of nature. The society was not ready to deal with replicas of nature. So the logical conclusion is that Ken and his friends are eunuchs until their end?

Ken doll, the first one

In 1961 Ken doll became available. He was designed as a male friend or more, depending on the fantasy of the girl who owned him. At first he was marketed a doll for boys. Ruth Handler did not want to limit the fantasy of children during their plays. This can, of course, seen as an attempt to sell a wider variety of dolls to different children (female and male ones). Obviously this did not work out as planned. Girls found the male doll as attractive as Barbie doll. The sales figures were not bad but the target group was refocused. Early TV ads are a good example for this theory. Only the 1961 Ken came with flocked hair. The later versions came with painted hair. There was almost every year a re-issue of Ken until 1966.

Ken got a friend called Allan

In 1964 Allan was released as a male friend for Midge, Barbie’s best friend. So the four could go on a double date like in real life. I think from today’s point of view it’s a bit old-fashioned but I think in the 60s it was wide-spread. Allan disappeared in the late 1960s until he came back to a new generation of little girls when he and Midge celebrated their wedding (after a relationship of 25 years). Then he was suddenly gone for almost 10 years and came back in 2002 to become father (after almost 40 years of relationship). After the Happy Family play set time was over, he disappeared again. If you see him, greet him and say we kind of miss him.

ALLAN (or how to steal your best friend’s husband headmold for your boyfriend). Jokes aside… In 1990 a handsome groom made his reappearence to marry Barbie’s bestie Midge with a facemold exclusively made for this ocassion. The flamant groom was Allan and his face became so successful that Mattel set aside the plans to launch him and Midge with their own family line as a replacement of the Heart Family (years before the Happy Family) to give Ken this new face because people prefered the Alan facemold (with a single L) than the 1988 Ken one. The 90s saw Ken with several faces, many created from Alan’s mold as a base with modifications, most of them in the way the hair was sculpted, although we can see some models with rooted hair too. Alan reapeared with Midge in 2001 with another face mold in the controverted line Happy Family and since this line we didn’t see him again. The boys: Sparkle Surprise Ken 1992 (Alan Facemold) Ken Secret Heart 1991 (Secret Heart Ken Facemold) Ken Hollywood Hair 1992 (Short Hair Alan) Ken Magic Jewel 2002 (Alan Rooted) #alanfacemold #barbiealan #kenalan #barbiemattel #kenmattel #alanmattel #kenhollywoodhair #kensparklesurprise #kensecrethearts #kenmagicjewel #fashiondoll

After Allan was gone, Brad came. Brad was the male friend or boyfriend of Christie. Brad, Christie and the black Francie were the first black Barbie dolls available. Today they are highly sought after. Then after Brad came Curtis, a male friend of Cara. His availability was also very limited to two years in the early 1970s.

Ken got eventually real hair (like Barbie doll) in the 1970s, one edition was the “Now Look Ken” in 1975 and the other one was “Sport and Shave Ken” in 1979. Groovy. The next Ken with real hair was the “Totally Hair/Ultra Hair Ken” in 1991 and “Shaving Fun Ken” in 1995 or 1996, then the Ken of “Butterfly Princess Barbie” also had real hair and a late 90s version of the Shaving Ken too. All the other editions had painted hair. Ken was constantly available and a reliable companion until 2004. Suddenly Ken and Barbie were separated and Barbie got a new boyfriend called Blaine but their relationship did not last that long. At the begin of this decade there was a reunion of Barbie and Ken.

In 1981 the Sunsational Malibu Ken (black version) was the first official black Ken. I read about it that it became possible due to changed laws in 1980. A hispanic version of Ken was available in 1983, the Sun Gold Malibu Ken (hispanic version).

In 1982 Ken got a friend called Todd ( not sure if Todd from Tutti and Todd grew up or if this is another character). In 1986 he got a new friend called Derek (Rocker Derek).

Skipper got male friends too

Skipper also got a male friend or boyfriend in 1979 called Scott but he disappeared again in 1980. Later in the early 1990s she got a new companion called Kevin from around 1990 until 1995. Unfortunately I was not able to find more information about Kevin.

Kevin sure is …. something. I have a feeling that he never got to use his lunch money ?. He’s cute, but he doesn’t have rubber legs!!! Why?!? Was there a version of him made with rubber legs? @eric_joseph79 I’ve seen him in your collection, what are his legs like? #barbiekevin #skippersboyfriend #dork #boxedbarbie #barbiebox #barbiefriends #friendsofbarbie #dudeswithdolls #dudewithdolls #dollstagram

Sometimes pics appear from Barbie prototypes.  Last week I got to see some Ken prototype heads. I asked Patrick McGovern for the permission to show them.  I think it’s a Mod Hair Ken prototype but I’m not 100% sure.

I must say I really like these prototypes. I think they had sold well. I’m not 100% but I think the first blond rerooted Ken came in the 90s or as a Fashionista Ken recently. I’m not so good informed about Fashionistas because I don’t collect them.

When I started to collect Vintage Barbies I had no idea how to distinguish all the different Ken dolls. Now I have one from each year (1961- 1964). When you have a look at the pics you can see differences. The make up differs each year. These pics show only the straight leg Kens. 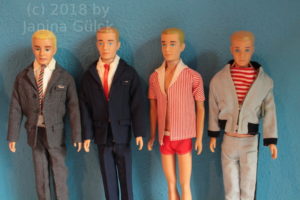 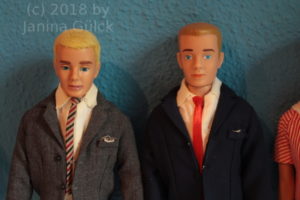 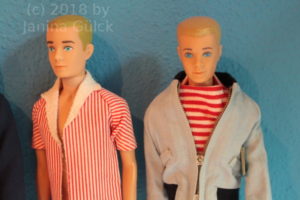 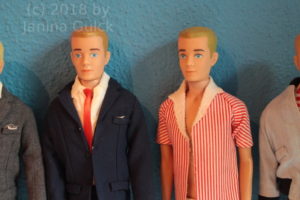 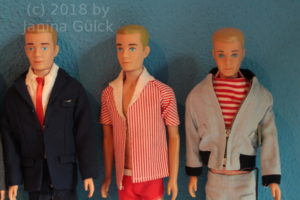 Last week I tried something new. Last summer I got a Nr.1 Ken. He was bold and had lost all his hair. I felt sorry for him and decided to reflock his head. Here’s the result. I think it’s not bad for the first time. 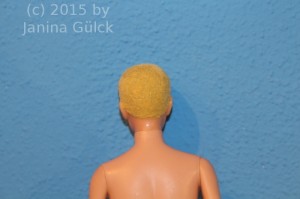 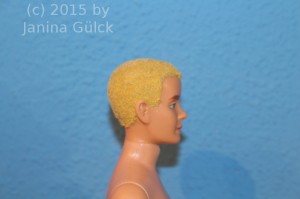 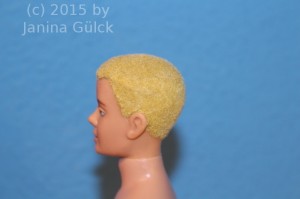 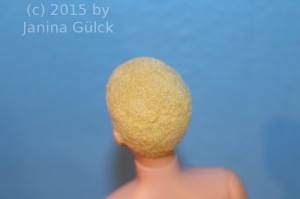 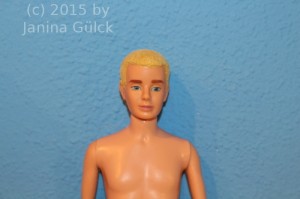